Atascadero, CA – Former Governors Arnold Schwarzenegger and Jerry Brown and other local elected officials joined high school students, business leaders and workers, renewable energy advocates, and community leaders to celebrate achieving one million solar roofs in California. The celebration was held at Buchannan High School in Clovis. The former governors then announced their next goal; One Million Solar Batteries in California by 2025. 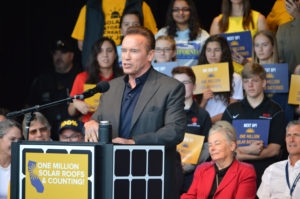 California made international news when Governor Arnold Schwarzenegger signed the Million Solar Roofs Initiative (SB-1-Murray) in 2006, setting a goal of building a million solar energy systems on homes, schools, farms, and businesses throughout the state.

Solarponics founder Mike Emrich and President Kristian Emrich were invited to the stage and recognized for their contribution and dedication to solar energy and renewables.

“In the early 1990’s, we were installing one or two systems a year. There were maybe a few dozen solar energy systems in the state.” says Kristian Emrich, Solarponics president. “We installed more solar in the first 15 days of December than we did the entire year in 2006.”

California now has over 12,000 MW, or roughly 19% of all energy produced, in installed solar electric, making it the highest solar power generating state in the nation.

“The solar installed in California is equivalent to four nuclear power plants. When you start to look at solar in those terms, the potential and versatility of renewable energy is indisputable,” said Mr. Emrich. 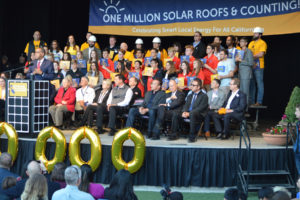 San Luis Obispo County certainly did its share to hit the million solar homes mark. When Mr. Emrich and Solarponics installed a seven-panel system on the home of Dan Robinson of Paso Robles in February of 2018, they were excited to learn it would be the 10,000th solar home installation in San Luis Obispo County. Today, there are 13,500 residential solar homes in the county, generating roughly 120 MW of solar energy. It is estimated that SLO County solar residents will save roughly $500 million in energy costs over 20 years and offset 2.5 billion lbs. of carbon emissions.

Homeowner savings and carbon emission reductions are not the only benefits of the booming solar industry. Solar has also created over 250,000 jobs nationwide since 2009, 77,000 jobs in California, with 2,600 of those jobs in San Luis Obispo County.

California Solar & Storage Association Executive Director Bernadette Del Chiaro, Mr. Schwarzenegger, and others also announced their support for a new program, the Million Solar Batteries Program. Battery storage allows homeowners and businesses to store energy for use after sundown or during a blackout. A significant battery storage program will be a key component to helping eliminate grid demand and help solve our energy needs of tomorrow. Half of all solar electric systems that Solarponics installed in 2019 included a battery storage component.

“This shows policy makers and the public that with regard to climate change we can swing for the fences with a big idea and get desired results,” said former Senator Kevin Murray, author of SB 1.