Why Are Solar Panels Always Black Or Blue? 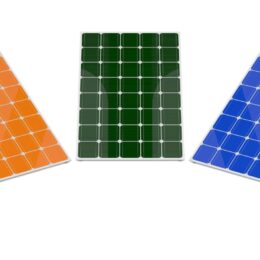 The two primary kinds of solar panel colors, black and blue, are monocrystalline and polycrystalline. Monocrystalline solar cells that are black are made out of silicon where each solar cell is a single crystal. This makes them considerably more efficient, especially since black as a color is more light-absorbent than the blue color. Blue solar panels are made from polycrystalline silicon where a single cell contains several silicon crystals, and the way those crystals interact with sunlight makes them appear blue. Polycrystalline technology used to be cheaper than monocrystalline, which is why you are more likely to see blue panels in older installations.

Solar panels can be different colors, but at a significant sacrifice to efficiency and affordability. Dyes and coatings can be used to change the color of solar panels. However, dyes and coatings, as stated, also dramatically reduce panel efficiency. Colored solar panels created with this method are as much as 45% less efficient than the standard blue or black solar panels. Dyes and coatings also do not handle tough conditions well, so it’s likely that colored panels will eventually lose their vibrance over a panel’s 25-year lifespan. Thus, this aesthetic improvement isn’t worth the lost efficiency and greater cost for the average homeowner

A variety of new technologies are being experimented with to create more efficient colored panels, and a wider range of colors to suit more environments, color schemes, and aesthetics. For example, researchers in the Netherlands have developed a soft-print lithography technique that allows panels to reflect a specific color. Unfortunately, this still reduces efficiency, but only by about 10% compared to the 45% of other coating methods. With continued improvement, they aim to reduce that loss in efficiency to as little as 2%.

So, while we don’t have solar panels in all the colors of the rainbow available yet, the technology is definitely being worked on.