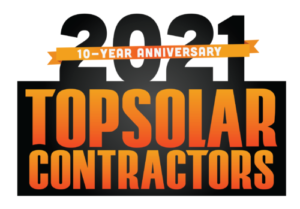 ATASCADERO, CA—Solar power is a booming business worldwide, and local installer Solarponics is among top companies recently named to an annual and well-recognized list of North America’s top solar contractors. This marks the 9th year in a row that Solarponics made the list.

The Top 500 Solar Contractors List is developed by Solar Power World magazine to recognize the work completed by solar contractors across the U.S. and Canada. The companies on the list are growing the economy, providing jobs and offering electricity consumers a choice about how they get their power. The list was released July 26.

Solarponics employs 47 workers, whom have installed over 5,000 energy systems in since its founding in 1975. Solarponics installed some of the first solar water heating systems in California. At least a few of those systems are still in operation today, forty-five years later.

Solarponics works amid a burgeoning business market. The U.S. solar market is expected to grow 80% this year, according to global research firm GTM Research. While a majority of solar electricity is produced at large, utility-scale solar power plants, the greatest number of solar jobs are located with companies like Solarponics — small, local residential rooftop installers.

“We just put our heads down and do the best we can in our local market,” says Solarponics president, Kristian Emrich. “It helps that we all love what we do, and can confidently help our friends and neighbors save money going solar. Every year, we think we’re going to slow down, but every year we get busier,” says Emrich.

About Solar Power World Solar Power World (SPW) is the leading online and print resource for news and information regarding solar installation, development and technology. Since 2011, SPW has helped solar contractors—including installers, developers and EPCs in all markets—grow their businesses and do their jobs better. SPW is published by WTWH Media in Cleveland, Ohio.

About Solarponics Founded in 1975, Solarponics is the oldest, continuously operating solar energy company in California and has installed over 5,200 energy systems on the central coast. Today, Solarponics installs solar electric, home battery, EV Chargers, solar pool heating, solar water heating, and radiant heating systems for residential and commercial projects. Solarponics is based in Atascadero, CA and can be reached at (805) 466-5595.