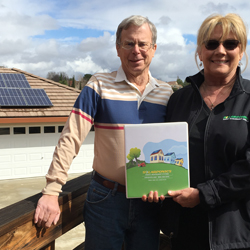 Atascadero, CA – Last month, Paso Robles resident Dan Robinson decided he wanted to save money and do the right thing when he called Solarponics and applied for a solar energy permit to install solar on his home. Little did he know that his application would be the 1,000th solar energy permit filed in the city of Paso Robles. With Mr. Robinson’s solar install, Paso became the first city to reach 1,000 installs in San Luis Obispo County.

“These seven panels on my roof can do the same for me as a multi-billion dollar power plant… with no pollution,” says Mr. Robinson. “Solar makes so much sense on so many levels. It’s the right way to go.”

Solar energy first became popular in the late 1970’s when President Carter installed solar water heating panels on the White House. At the time, electric rates hovered around a low of 5¢/kWh. Solar electric and solar water heating systems were still quite a bit more expensive than utility-purchased energy.

“Five years ago, we could not have imagined reaching this milestone…1,000 solar roofs in Paso… 10,000 county-wide. And now, here we are. Our vision is to see renewable energy systems on every single structure in the county. So, there’s a lot of work to do still,” says Mr. Emrich.